MUSAWA- The Palestinian Center for the Independence of the Judiciary and the Legal Profession, considers the Justice sector to be one of the most important and influential sectors in a Palestinian civilian’s life, and affects the capability of Palestinians toward national independency, especially in this vital and important stage, heading in the direction of building a sovereign Palestinian state.

In this context, and since 2007, MUSAWA has published four Legal Monitor Reports on the perceptions of the Palestinian people on the performance of the pillars of justice in Palestine (West Bank and Gaza Strip). In this regard, a large sample of different groups in the West Bank and the Gaza Strip were surveyed. These included judges, members of the public prosecution, Shari’a court employees, standard court employees, lawyers and law interns, as well as teachers and students in law schools from different Palestinian universities. In addition, a general representative sample of the Palestinian public was surveyed, and another sample that represented “the litigants,” which refer to the Palestinians who dealt with different Palestinian courts. All these surveys aimed to form a clear image about the condition of justice in Palestine during the past years in order to measure the progression and regression in performance and capabilities.

MUSAWA is intending to conduct the Fifth Legal Monitor (2016-2018) to measure the development of rule of law in Palestine and to track changes in the public perception of key justice and security institutions. The survey sample, that is currently carried out by the PCBS takes into consideration the following categories; judges, public prosecution employees, lawyers, trainee lawyers, Law teachers/professors, law students in law schools from different Palestinian universities, the general public and public litigants. Furthermore, the survey is supposed to shed light on these categories in different geographical locations (districts, cities, towns, villages, and camps), gender, age and place of residence.

Thus, MUSAWA is soliciting proposals from qualified individuals or institutions to read the raw data provided by the PCBS that is being prepared in the survey carried out in the West Bank and Gaza, and provide a thorough analytical report where it can be possible to read and compare against the previous reports.

The contracted individual or institution is expected to carry out the following key tasks:

Review the raw data received from the PCBS and review the methodology used.
Conduct analysis of the data and prepare the Fifth Legal Monitor Report; and
Provide a brief summary about the general results and indicators.

The task should be completed within a two-month time period, beginning on the date of contract signature.

The contracted individual or institution is expected to deliver the following:

The contracted organization is expected to submit a detailed report in Arabic on how the task will be carried out. The report has to include the following:

Methodology (based on that is provided by the PCBS);
Detailed work plan, including time frame.

A detailed final report should be submitted in Arabic outlining the results of the assessment and clearly distinguishes between users versus non-users of the justice system, stating the opinions of the public (the general public and the litigants public), lawyers, law interns, Law teachers/professors, as well as law students in law schools from different Palestinian universities, and compare these categories' views  with the views from the relevant categories in the Fourth Legal Monitor (2014-2015). The final copy should be submitted in hard and electronic form. It should include the following sections:

Executive summary of the study should be submitted in Arabic and English.

Bids will be evaluated on the basis of the technical and financial proposals submitted that should include the resumes of the individuals who are going to prepare the report. The proposal will not be considered technically compliant if it does not meet the minimum score required. The scores are detailed in the following tables:

Technical proposals will be evaluated based on the following criteria: 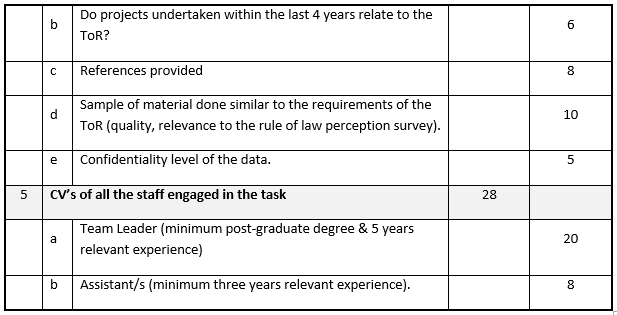 Financial proposals will be scored based on the following:

denotes for the price of the lowest proposal. Lowest price will get 100 points of score.

is the price of other proposal.

Score of the other proposal will be calculated in the following formula:

Please submit your proposal and price offer to the following contact details: