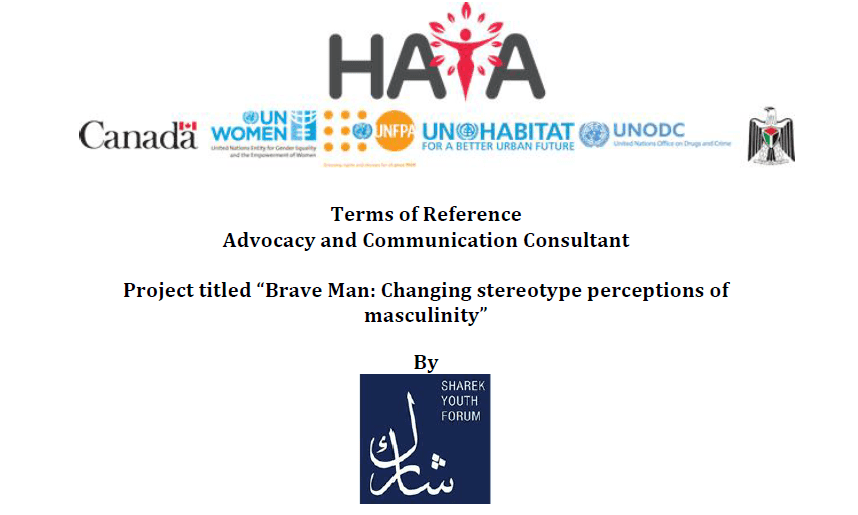 Background about Sharek Youth Forum and the Project

Sharek Youth Forum is a leading Palestinian youth organization with the primary goal of creating the space and capacity for youth to engage as active participants in all sectors of civil society and to participate in the development of local communities. Originally launched as a program of the UNDP in 1996, Sharek became an independent NGO in 2004. As a youth organization for youth, run by youth, Sharek tackles development issues from a unique perspective which directly reflects youth needs and visions. Sharek’s core programs include economic empowerment initiatives, providing services to connect youth mentors with underserved children to ensure the realization of children’s right to play and provide complimentary education services; building capacities of other youth organizations, especially small community based youth organizations; and arming youth with knowledge of their human rights and the capacity to articulate, effectively communicate, and persuasively advocate for change on the issues that most affect them, as active individuals and engaged citizens in the process of building a culture of reciprocal respect and democracy in Palestine. Sharek designs and carries out its youth development programs with hundreds of motivated youth volunteers involved in project.

Sharek is one of the program partners, where the project titled “Brave Man: Changing stereotype perceptions of masculinity” will be implemented by Sharek. Project started on 3rd July 2019 and will conclude on 31st October 2022

In order to promote equal and respectful relationships among women, men, girls and boys, Sharek Youth Forum will implement the “Brave Man” project. The project will be implemented with a total of 9 schools and 9 communities surrounding these schools throughout three years; targeting 3 schools every year.

The project is divided among 3 core interventions:

Evidence-based awareness-raising campaign will be lunched under this intervention, where public media such as radio stations and social media such as Facebook and Twitter will be used to showcase and interview male role models from the targeted local communities and/or other neighboring communities who lead non-hegemonic lifestyles, and those advocating for men’s engagement for gender equality, and initiate discussions about different topics concerning the issue. These role models will be identified at the local level by partner CBOs, target schools and participating youth. In addition, it will link to the other activities that will be implemented throughout the project. This comprehensive approach will increase societal openness towards non-hegemonic lifestyles, function as a kickoff for young men to get engaged for gender equality and increase societal debates about gender equality and against all forms of GBV. The media campaign will reach approximately 100,000 indirect beneficiaries and will through the various channels that are to be used tackle a wide diversity of people among the audience.

In order to implement the Brave Man Awareness Social Media Campaign with maximum outreach and influence on the Palestinian community, Sharek is willing to hire an advocacy and communication consultant to develop strategic, context appropriate communications initiatives and approaches to be adapted during the project life cycle. In specific the consultant will:

- Draft a complete Advocacy and Communications Strategy which should include: clear objectives, messages, allies/partners/stakeholders etc..
- Develop messages about non-hegemonic lifestyles and gender equality from our identified role models.
- Review all media productions including the 36 short videos and posters, that will be developed by Sharek Media team to make sure that it reflects the agreed upon messages.
- Conduct orientation sessions for local CBOs to introduce the awareness media campaign and to more aware them in regard the campaign messages.
- Support the project team in the publicity/outreach for the project, knowledge-sharing events and promotional opportunities
- Proofreading and fine-tuning of texts and materials (if needed)to make them understandable and interesting to the targeted audience.

Interested Consultants are requested to submit proposals in two separated sealed
envelopes including the following documents:

- Technical proposal with specific focus addressing the purpose and
objectives of the assignment, methodology & proposed work plan.
Previous work, expertise showed be highlighted in the technical proposal
along with his/her C.V.
- Financial Proposal: Detailed budget breakdown based on expected daily
rate in NIS liked to the expected LOE per the initial work plan.

The proposal must be submitted no later than 20th October 2019 the following
address:

Late, fax, email and unsealed submittals will be rejected